Ivermectin is an avermectin and a fermentation product of Streptomyces avermitilis. It acts as a GABA agonist, causing paralysis in susceptible arthropods and nematodes. It is used in small animals for treatment of Sarcoptes scabiei, Otodectes cynotis, Cheyletiella blakei, C yasguri, and Demodex canis; in cattle for psoroptic mange, lice, and Hypoderma larvae; in horses for equine filarial dermatitis from Onchocerca cervicalis; and in swine for Sarcoptes scabiei. 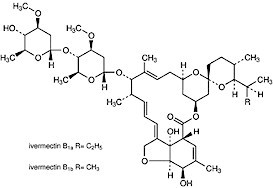 As all macrocyclic lactones, ivermectin acts as agonist of the GABA (gamma-aminobutyric acid) neurotransmitter in nerve cells and also binds to glutamate-gated chloride channels in nerve and muscle cells of invertebrates. In both cases it blocks the transmission of neuronal signals of the parasites, which are either paralyzed and expelled out of the body, or they starve. It also affects the reproduction of some parasites by diminishing oviposition or inducing an abnormal oogenesis.

ivermectin is effective against the major parasitic Roundworms :

It is also effecive against most  mites and  lice species, and against numerous myiases (e.g. those caused by  screwworm flies,  bot  flies and warble flies)

Efficacy against a specific parasite depends on the delivery form and on the dose administered.

Ivermectin is a semisynthetic, anthelminitic agent. It is an avermectin which a group of pentacyclic sixteen-membered lactone (i.e. a macrocyclic lactone disaccharide) derived from the soil bacterium Streptomyces avermitilis. Avermectins are potent anti-parasitic agents. Ivermectin is the most common avermectin. It is a broad spectrum antiparasitic drug for oral administration. It is the mixture of 22,23-dihydro-avermectin B1a (at least 90%) and 22,23-dihydro-avermectin B1b (less than 10%).

Administration to collies and related breeds not recommended, highly toxic to aquatic animals. Ineffective against trematode, cestodes, and adult canine heartworms, IV & IM should not be done.